It is one thing for a book to be topical – whether by serendipity or design – but it is quite another for it to be good. Mark Lilla’s The Shipwrecked Mind is a study of ‘the reactionary’, the antithesis of the revolutionary and, according to this book, our epoch’s ‘shipwrecked mind’. His motive for writing the book is simple; whilst we have a myriad of studies of revolutions, he claims, “we have no such theories about reaction”. Presented with this opportunity to be formative, Lilla largely seizes it with steady hands. His grasp of history’s micro and macro trends is capable, at times fascinatingly revelatory, although at others the sheer magnitude of his sweeping sight renders the fundamental arguments slightly porous. Regardless, the vision to fill an important gap in the study of human psyche is half the battle, even if he does not land each attempted blow. Overall, Lilla’s latest release is highly relevant to our times, and could well prove seminal in our understanding of today’s shifting political plates. If anything, its flaws fuel further debate even more.

The Shipwrecked Mind comprises a selection of essays on the reactionary and is, as Lilla himself professes, “a very modest start”. In doing so, he intends to begin redeeming the process by which “the present has become so illegible to us” through our reluctance to understand the present by connecting it with the past. The core thesis is that, contrary to popular misbelief, the modern day conservative’s head is not simply stuck in the sand, resistant to all emerging novelties in his adulation of the halcyon days of old. Instead, he is more of a counterrevolutionary, reacting to and rejecting the ideas forged by revolutionaries ever since 1789. Crucial to legitimising Lilla’s call for attention is that, whilst “the revolutionary spirit…may have died out”, “the spirit of reaction that rose to meet it has survived”.

His task is not as straightforward as simply tracing existing themes back to their inception (at least as perceived by Lilla), however, as he wishes to desist from making the oversimplifying statements that others have fallen victim to. Juggling a desire to look back for answers, with the risk of subscribing to a Whiggish view that the inertia of history charges forward unstoppably towards a preordained destination, is fiercely difficult.

The first section- ‘Thinkers’ – aims to further his briefly outlined theory not by explanation, but exemplification. He introduces three figures from the 20th Century – Franz Rosenzweig, Eric Voegelin and Leo Strauss – whom he claims were reactionaries. Rosenzweig, a non-committal Jew on the brink of converting to Christianity, suddenly experiences what can best be described as an epiphany and sets out to redefine the path of 20th Century Judaism. Integral to Lilla’s differentiation between conservatives, who pine for a bygone age, and the reactionary, who is shaped by a changing world, Rosenzweig allegedly saw the ways of Judsaism’s ancestors as incompatible with the current day. A new approach, fashioned on but distinct from Jewish roots, had to be pursued.

Lilla’s lucid style and competent handling of complex concepts is worthy of recognition. In fact, it is one of this book’s strengths. Each section starts by grounding the relevant figure concisely in his historical context and significant sources of influence, whether that be Nazism for Voegelin or Heidegger for Strauss. Regardless of how complex and nuanced his ideas become, Lilla maintains governance and moulds them to his will. He deals with a plethora of titanic names – Austine of Hippo, Rousseau, al Farabi, Maimonides, Hegel – with startling ease. Writing a book which aims to trace man’s interpretation of past and present events and beliefs demands the utmost comprehension of his subject matter. Lilla succeeds in this task admirably. 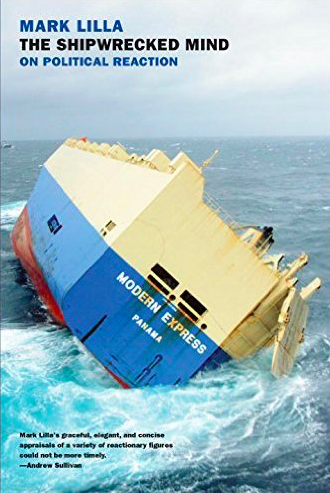 Conceptual problems do arise, however, throughout ‘Thinkers’ and indeed the whole book. Whilst Lilla raises interesting individual points (such as identifying the ubiquitous tension between religion and politics which forms, changes and destroys beliefs and movements), his underlying theory behind the reactionary often seems hazy, even muddled. In one instance he concludes a trail of thought by quipping that the linear narrative of Christianity (as a journey from the Ultimate Sacrifice to salvation) makes its followers good politicians, whereas Judaism’s transcendental nature renders Jews incapable of taking part in society’s progression. Such a neat yet flagrant categorisation, even if meant only jocularly, leaves questions about Lilla’s sustained commitment to academic rigour and control.

Indeed, the entire rationale behind selecting three ‘thinkers’ to explain and prove his shipwrecked mind theory is dubious. As skilful as Lilla is at making highly persuasive individual arguments, the integral link he attempts to make between these three men, with their radically different circumstances and notions, does not convince. Strauss did believe that the Enlightenment’s erosion of natural rights ultimately led to the decline of the West. But does that really place him in the same boat (or, perhaps, on the same shipwreck island) as Voegelin, who blamed Christianity for establishing contemporary Gnosticism, which he felt was the cause of Nazism? Is a shared looking over the shoulder for explanations for current problems sufficient to fashion a mutual worldview as Lilla does?

Each and every one of us will channel some past experience into our future endeavours, whether as inspiration or point of aversion. Claiming this as a universally encompassing alternative narrative to conservatism is somewhat tenuous.

The Shipwrecked Mind’s second section, ‘Currents’, aims once more to expound this idea through example. Lilla analyses how Catholic theoconservatives lay blame at Luther’s feet for the degeneration in western culture (titled by Lilla, as playfully as ever, ‘From Luther to Walmart’), and ‘From Mao to Saint Paul’ posits that the contemporary Left has sought reactionary inspiration in Saint Paul’s words. Interestingly, the atmosphere of impartiality is deserted during the authorial attack on Brad Gregory’s The Unintended Reformation. Beginning by lambasting how “the Church has no widely accepted theology of history”, Lilla proceeds to ridicule attempts to trace consumerist/solipsistic-driven moral bankruptcy back to the nailing of the 95 Theses on to Wittenberg cathedral’s door. “Such myths do nothing but feed a more insidious dream: that political action might help us find our way back to the Road Not Taken”.

Nor does the Left escape lightly. Writers such as Badiou are discarded with their foolish “nostalgia for the future”, banished to pursue their “somewhat desperate search for intellectual resources” (such as Saint Paul’s obviously incompatible teachings) in a far off, unseen intellectual oblivion. Whilst ‘Currents’ might not redeem the holes exposed earlier in Lilla’s key theory, it is still an entertaining exhibition of punches un-pulled, landing devastating blows.

As if warming to the task, the proceeding ‘Events’ chapter is by far Lilla’s strongest moment. Here he once again enlightens by example, taking the January 2015 terrorist attack in Paris as his subject. He focuses on the French ‘reactionary’ reaction to these atrocities, specifically Eric Zemmour’s Le suicide français and Michel Houellebecq’s Soumission. The simple reason as to why this is Lilla’s most convincing section is that it is on a self-contained, single incident which he has clearly researched in great detail, and one which evoked reactions of an irrefutably conservative nature. No longer are we speculating about the identity and origin of past beliefs.

During discussion of Zemmour, for example, the reader receives a succinct description of the modern French right, the “self-declared patriot nostalgic for national grandeur…he scolds CEOs who have outsourced jobs…he charges bankers and financiers with betraying workers and the nation… the Revolution, which freed France to determine its own collective destiny, has finally been reversed by Brussels.” Such accuracy and eloquence is the zenith of non-fictional exposition, something of which Lilla is clearly capable.

Despite that, the indisputable tour de force of these pages are those dedicated to Houellebecq. Soumission is a seminal “dystopian conversation tale” which concocts a futuristic France so lacking in conviction and cultural identity that it elects the Muslim Brotherhood in 2022. The reason for this verges on dark humour; whereas western society has failed to ensure a sustainable rate of birth, Islam vocally encourages reproduction, and so the French people are left with no route to survival other than to elect government on such views. “Post-Christian Europe was dying and Islam was flourishing”.

Behind the elegance and intrigue of Lilla’s writing here, however, lies a delicious paradox: the most compelling section in a book on reactionaries is that on the one subject that rejects the validity, or sense, in pining for the past.

Instead, Houellebecq reveals a nihilistic mentality, saying that “cultural pessimism is as old as human culture and has a long history in Europe”. Rather than persisting to place our civilisation on a pedestal, as reactionaries do, we are destined to relinquish it in the face of impending threats, as in Soumission. We are at a loss as to where this leaves Lilla’s core thesis, by now a familiar feeling, but it is extremely thought provoking nevertheless.

The book is finally rounded off with an afterword-cum-fourth section, ‘The Knight and the Caliph’, in which Lilla shows off his already-established lateral thinking and literary flair by comparing contemporary Islamism with Don Quixote. Given this, it is unsurprising that his main point here is that 21st century Islamist extremists are nothing new, only that “it is in the Muslim world that belief in a lost Golden Age is most potent and consequential today”. With this implication that a belief “in a lost Golden Age” is a bad thing, it is at last revealed on which side of the debate our author falls.

Not only does Lilla disagree with the reactionary/conservative (even by the end, the difference is still not clear enough to use either term confidently), but he disagrees with their governing approach to history. “Narratives of progress, regress, and cycles all assume a mechanism by which historical change happens” – in other words, no such convenient mechanism exists. Rather than searching for symbols, underlying currents or rationale within the leviathan of human history, we must simply stand back and observe, accepting that we do so without the comfort of omniscience. This is a sensible if unexpected note to end what is a fascinating discourse – both fluctuating and steadfast, comprehensible and befuddling, current and universal – which resonates all the more at a time when the call for regression and backtracking, percolating through societies across the planet, seems to be growing louder than ever.

Mark Lilla was born in Detroit in 1956. He is Professor of Humanities at Columbia University and a regular essayist for The New York Review of Books and other publications worldwide. His books include The Shipwrecked Mind: On Political Reaction (2016), The Stillborn God: Religion, Politics, and the Modern West (2007), and G.B. Vico: The Making of an Anti-Modern (1994), as well as The Legacy of Isaiah Berlin (2001) with Ronald Dworkin and Robert B. Silvers. He was the 2015 Overseas Press Club of America winner of the Best Commentary on international News in Any Medium for “On France.”

Marcus Solarz Hendriks is a full-time tennis player. He can be found at his blog ‘Rambunctious Racquet’ – http://rambunctiousracquet.blogspot.co.uk/. He lives in Surrey, England. @hendriks_marcus

The Shipwrecked Mind is published by NYRB. Author bio courtesy of the same.