Owen Booth is the author of the recently released What We’re Teaching Our Sons (4th Estate), which has been described as “somewhere between a philosophical tract, Oulipean constraint, and a consoling, self-deprecating guide to fatherhoodHis short stories have been published in The White Review, Gorse Journal, The Moth, Hotel, 3AM Magazine and Best British Short Stories, among others. He won the 2015 White Review Short Story Prize. 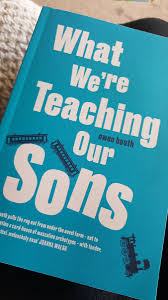 ine? Yours, possibly? Certainly, on the street where I grew up it was considered weird, and maybe a bit threatening, to be quite as enthusiastic about books as I was. But then my mum was a librarian, so what did they expect? I am wary of that whole ‘rising above my background’ narrative, though. I remember the first really posh person I met telling me “well done you!” for managing to make it down to London without the benefit of a private education. Now there’s a dreary expectation if there ever was one.

Also, having accidentally written a book that touches on that sort of thing, I should probably say something about the expectations of masculinity too. They’re pretty dreary for the most part, aren’t they? And responsible for causing/ excusing all kinds of awfulness. Hopefully we’re all trying to rebel against those expectations, these days. Rise up, men! But, you know, stop acting like you’re some kind of hero and deserve a fucking badge for doing it. Rise up quietly, and on your own time, and then get out of the way. It’s not all about you.

Well, all of it, I suppose. Doesn’t everyone, for better or worse? Do we actually have a choice? You can only play someone else’s game for so long before the cognitive dissonance eventually gives you a nervous breakdown. I wrote a thing about that for a book that Joanna Walsh edited called ‘Under the Influence’, in which writers write about being influenced by other creative people. It’s hopefully coming out soon. My piece explains how doing too many Content Strategy presentations almost pushed me over the edge. The creative person who I was working under the influence of was Robert Gaskins, the man who invented PowerPoint.

I’m not very comfortable with pride. Shame and embarrassment are more my go-to emotions, as they should be for all writers. And we should proudly own them. And then feel ashamed and embarrassed about that. That said, I think the new book holds up okay. It’s as good as I could make it. You’ll (hopefully) laugh and cry. And I’ve probably written a couple of half-decent short stories over the years, too.

Listen to me, going on about how great I am, sounding like a wanker. This is exactly what I was afraid of.

How about: having my entire social structure pulled out from under me from me when, as a sensitive, incredibly shy fifteen-year-old, I fell out with the bunch of teenage boys/ wannabe men I used to hang around with. I had to spend the next six months with nothing but books for friends, which meant that by the time I turned sixteen I had accidentally become an interesting person (or had reverted to the interesting person I’d been before), and was ready for my life to go in a completely new direction. All in all, it was absolutely the best thing that has ever happened to me. It still terrifies me to think of where I might have ended up if they hadn’t kicked me out of their gang. Thanks guys!

I’m not sure I have any integrity. But, at the same time, a person can really only write what they’re able to write, in the style that they’re able to write it, so there may have been occasions when, in my honest inability to write something that I was, nevertheless, being asked to write – for, say, promotional purposes – it might have seemed like I was acting with integrity. But I wasn’t. It’s just that cognitive dissonance thing again. For which I’d like to apologise to all those lovely marketing people.

I would least like to be one of those childishly attention-seeking middle-aged, mostly male writers/commentators/columnists/thinkers who appear to be desperately terrified of women/young people/foreigners/how the world has changed, and who get incredibly worked up about all the things that they’re supposedly not allowed to say anymore, while getting paid to say exactly those things.

I would most like to be a young James Dean/Mickey Rourke, mainly for the looks.

If I’m dead, I can start properly smoking again, right? So some tobacco, extra slim filters, green papers and a zippo lighter, thanks. Just like in the old days. Other than that, it’s all just stuff, isn’t it? So I’ll happily enter the new world naked. Naked and sexily objectified, like Harvey Keitel in Jane Campion’s The Piano. Though not in quite as good shape as Harvey was. Not yet.

I have three go-to quotes, which I cycle through repeatedly. You are welcome to all of them.

If we’re counting memoirs as self-portraits, and I’ve just decided that we are, then Joyce Johnson’s (see above) Minor Characters, which I’ve re-read more times than pretty much anything else, is probably my favourite. I would urge you to read it. And then read it again. And Sterling Hayden’s The Wanderer, which is far better written than any book by an impossibly handsome actor has any right to be. And also any of Hayden’s filmed interviews with Tom Snyder from the late 70s/ early 80s, which are all over YouTube, and which you should totally watch.