Nicola Pugliese’s Malacqua comes to the English-speaking readership as a mysterious secret. Passionately discovered and published by Italo Calvino in 1977, the Italian novel became an instant sensation, selling out in a matter of days. Yet the author soon demanded Malacqua be taken out of print — the cause for such banishment unknown — and it remained so until 2013, after Pugliese’s death. The book has now been translated into English, and for the very first time, by Shaun Whiteside — all thanks to the globally-curious folks at And Other Stories.

It thus follows that this edition may be quite a moment for Anglophone devotees of translated literature, who have suddenly been granted access to a book that was formerly unknown. Immediately popular, Malacqua was championed by a literary giant known for his love of fables and narrative invention. Pugliese also wrote little else in the way of fiction — he worked for years as a journalist — and followed the publication of his novel with a somewhat reclusive detour to rural life. So the lore which surrounds the book is certainly seductive.

Written at a time in Italian history which suffered domestic terrorism, labor strikes, and government retaliation, Malacqua is a slow and grey tale that unfolds over the course of four days of incessant, unexplained rain in Pugliese’s own Naples.

Written at a time in Italian history which suffered domestic terrorism, labor strikes, and government retaliation, Malacqua is a slow and grey tale that unfolds over the course of four days of incessant, unexplained rain in Pugliese’s own Naples. A backdrop of political strife is drawn, while bureaucratic impotence and government negligence — particularly in light of the dramatic weather and the structural damage it bears — is stressed:

“…it certainly isn’t the first time that our wretched city has had to record such tragic events, just as it isn’t the first time that adverse atmospheric conditions have determined situations of alarm or at least of alert, but we must obviously ask ourselves, fellow councilors, what were, technically, speaking, the causes of these upheavals, and whether those causes might be attributable to chance, to accident, to the whims of fate, or whether they should not rather be attributed to neglect, to slothfulness and incompetence, as well as to the fact that works and repairs and the reconstruction of the sewerage system which everyone has identified for years as urgent and pressing had been put off indefinitely.”

The torrents bring with them monstrous sinkholes. On the first day, a bridge collapses and an apartment building is destroyed. Both structures had been forever known as unsafe by authorities and were long awaiting their eventual repair or removal. Traffic is thrown awry, along with the daily life of the city. And the rain continues to fall, while people begin to marvel at its persistence. Strange voices are heard howling from within an old castle.

This howling is the first of two surreal moments which shock the grey realism of a book built from a string of scenes exploring the mundanities and psyches of the Neapolitan public. These odd events inspire a rumor that the rain is a harbinger of some coming drama. Folks’ confusion with the endless rain — their wondering what it may mean, when it will end, or if it previews an extreme, cataclysmic conclusion — acts as a constant refrain that ties together each respective vignette. Occupational struggles, family lives, and quite sexist tales of passion — “you can’t just spend hour after hour every night pumping juice between your wife’s plump thighs” — are all elaborated in brief fragments. The journalist Carlo Andreoli is the lead character, if there must be one. He observes and reports the damage the rain brings while wondering confusedly about it all — like everyone else:

“There was nothing to smile about any more, with this rain now, nothing at all in the end, and in fact the cruel harshness of a vague and heavy question was concentrating in people’s fists. On the city, if you looked up, that veil of rain was coming down and coming down, and the rain marked a fine weft in the distance, and the same thoughts, deeply marked by that fine vertical rain that was falling on threads of water that mingled with the fallen water and the water that was yet to fall, and because now there was a harsh and deep and cruel awareness: this rain would continue, yes, it would continue until the event became apparent, until the ultimate significance became clear and apparent even to the most defenceless and the weakest minds. In fact, all that remained was to reconsider everything, really everything, from a perspective other than this one of waiting opened up by the rain.”

But a perspective of waiting does dominate the novel. The above and lengthy passage reveals the premonitory feel of Malacqua, which evokes László Krasznahorkai, with oceanic sentences that seem to never end, and are constantly re-tracing their steps. It is an effective tool for conveying the slowness and stupefaction of a public — and a bureaucracy — failing to understand or handle bad weather on a scale that resonates eerily with our own moment of climate change.

A perspective of waiting does dominate the novel.

On the second day, the police and the government deliberate over two dolls which were found in the Maschio Angioino — the castle which was heard howling — and consider them the source of this mystery. They wonder what it all means, come to no conclusions, and distractedly think about the rain which continues to fall all around them.

The third day enlarges the private lives of the book’s cast. A café owner fantasizes about his British wife. A young girl abandons propriety and pursues an erotic adventure. A sad poet even waits for no one at a rained-out lecture held in his honor. There is more destruction of bridges, and death. The government is stuck in slow dialogues about roads and things. And a day in the past when the sea rose dramatically is recalled. And another strange thing occurs. Music begins to play out of five-lire coins, though only ten-year old children are capable of hearing it. 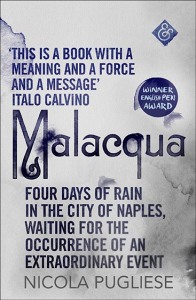 The book has a bad vibe. Dull acceptance, along with vague musings about something somewhat magical coming sometime, is the basic view of Malacqua’s citizens as they watch the water. It may be a novel written in the spirit of a terrific — and terrible — resignation. On the fourth day, it ends ambiguously, after fifty pages of the protagonist shaving and contemplating that, yes, it is still raining. He then considers another day of rain might pass, before it all ends, and normal life resumes:

“…perhaps no radical disruption would come crashing down to shift the cobbles in the streets and open wounds, the extraordinary event would not take place, it was stupid to imagine that it really might, but you know how it is, sometimes we’re suggestible, oh no, not completely, the days would carry on as before along the merciless street, what would be left?”

The journalist seems now at peace, finding “the perspective of things would not change, no, not for anything in the world.”

He then finishes shaving and thinks to himself, “how stupid, my God, how stupid.” It’s not wholly clear if he feels that expecting something to come of the rain — or his latest reverie that it will just end — is stupid. Likely he believes things will go back to normal. The citizens will go back to their drudgery and their sex lives while the government will continue to ignore its depleting infrastructure. Malacqua’s world has not shifted due to the trauma it’s faced. Below the strange rain, the populace waited and wondered. And they will now return to business as usual.

It feels very cynical, and familiar. This apathy and resignation as a response to tragedy and bureaucratic puttering. More than the rain, which isn’t clearly tied to ecological destruction, this defeatism seems at home in a world where politicians shrug their shoulders in the wake of mass shootings while proffering the vaguest of condolences. Throughout much of Malacqua, action and agency seems totally impossible. Yet tucked away in this slow novel is a strange little moment of possibility.

One section uniquely betrays the vague, repetitive formula of wondering and waiting. It is the moment when the five-lire coins begin to sing. On the third day, Sara Cipriani’s mother destroys her beloved portable radio. This distraught girl then discovers that her coins are playing music, and ten-year old girls throughout Naples collectively discover that their money is also singing. The event inspires a music fever in the city. Politicians discuss giving music a more prominent place in the curriculum. New schools and institutions are founded instantly. And funds are quickly allocated in order to produce a line of souvenirs all emblazoned with the image of a treble clef. The day is declared a holiday, the “First Day of Song,” and the Head of State attends a performance in which Sara Cipriani herself is honored with a gold medal.

It’s unlike this novel to show anything happening, and so quickly. The bright moment is soon absorbed by the mood of waiting which concludes the book. But it exists within Malacqua as an alternative to the way its universe operates. And it may even be the most interesting part of the book. Because, actually, cities and governments should be rearranged due to a song that only children can hear.

Dan Ivec is the author of On the Stairs (Meekling Press). His poems have appeared in Verse, Guernica, 6×6, and elsewhere. His drawings can be seen on Instagram, @venial_usa. He also shares his birthday with Anatol Vieru, who wrote three operas.

Nicola Pugliese was born in Milan in 1944, but lived almost all his life in Naples. A journalist, his first and only novel, Malacqua, was published in 1977 by Italo Calvino. It sold out in days, but, at the author’s request, was never reprinted until after his death in 2012.

Shaun Whiteside‘s translations from Italian include Q, 54, Manituana and Altai by Luther Blissett/Wu Ming Foundation, The Solitude of Prime Numbers by Paolo Giordano, 50 Strokes of the Brush Before Bed by Melissa Panarello and Venice is a Fish and Stabat Mater by Tiziano Scarpa. He also translates from French, German and Dutch. He lives in London.

Malacqua is published by And Other Stories.