I want to read around and in reaction to these poems.

Offer my own faint fragmented exegesis.

This is a failing against the written word.

This is a flailing against the empty page. 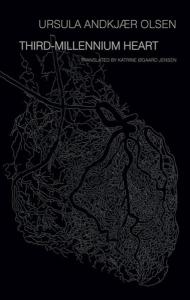 Ursula Andkjær Olsen (b. 1970) was born and raised in Copenhagen. She has a degree in music and philosophy from the University of Copenhagen and Technische Universität Berlin. Olsen made her literary debut in 2000 and has since published eight collections of poetry, in addition to several dramatic texts and libretti for operas such as Danish composer Pelle Gudmundsen-Holmgreen’s Sol går op, sol går ned, and composer Peter Bruun’s Miki Alone, which was awarded the Nordic Council Music Prize in 2008. Olsen has received numerous grants and prizes for her work, including the prestigious award Montanaprisen for Det 3. årtusindes hjerte (Third-Millennium Heart).

Katrine Øgaard Jensen is a translator and writer. She is one of the founding editors of EuropeNow, a journal of research and art at Columbia University, and a returning judge for the Best Translated Book Award (Fiction 2015, Poetry 2016, Poetry 2017). She previously served as editor in chief of the Columbia Journal and blog editor at Asymptote and Words Without Borders. Her translations have appeared in the Washington Square Review, the Denver Quarterly, Words Without Borders, Asymptote, and elsewhere.

Joseph Schreiber is a writer based in Calgary, Canada. He is criticism/nonfiction editor at 3:AM Magazine, and an editor at The Scofield. His reviews and essays have been published in a variety of literary sites and publications including Numéro Cinq, Quarterly Conversation, Minor Literature[s], and RIC Journal. @roughghosts