“The sinking sun ripped shadows from everything, creating elongated skeletons of darkness that were almost comically menacing.”

Here’s a book about the impossibility of revolution.

In the year 2144, medicinal and recreational drugs have become so effective that Big Pharma rules the world: everything from rejuvenation to plague cures to instant, hardcore bliss is available, for a price, in non-addictive chemical form. In this future, robots have also achieved sentience and civil rights, in that order, and the law is perfectly fucked up vis-à-vis ownership and property – intellectual and otherwise. In fact, in a series of legal battles it has been established that a) robots are equal to humans and deserve autonomy, but b) they must first be indentured for a few years to make it worth the cost of producing them, therefore c) humans (their equals) must be indenturable also. It’s a chilling little syllogism, demonstrating a core theme of the book: the difference between lawfulness and justice.

The protagonist, Jack, races around in an invisible submarine, pirating drugs with computer programs and synthesizers. The story begins when a “productivity drug” she has been pirating starts turning people into insane workaholics, and she needs to find a way to fix it before law enforcement murders her. The reason she is reverse-engineering copyrighted drugs at all is to help plague-struck populations have access to life-saving chemicals – Big Pharma (the faceless villain) would just let them die otherwise. Big Pharma pulls the strings on the law enforcement hitman who is after Jack, and they seem to control economic coalitions and everything else as well. Bizarrely, in this topsy-turvy futuristic dystopia, access to life-saving drugs is also determined by wealth, status, and connections instead of need. This thread of the story creates the link between intellectual property law and injustice – “It’s time for humans to understand that property is death,” one character quips. It’s spelled out pretty lucidly that the idea of corporations having intellectual property leads to individual human suffering, from abject poverty to slavery to assassination. Newitz presents a sometimes difficult-to-believe future with the kind of clarity you might find in sociological textbooks. Either way it’s still easier to imagine than the end of capitalism. 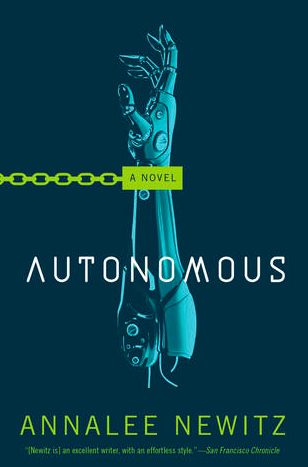 The crisis of imagination seems to be the crux here. Imagination is needed to perceive the now. You need it to perceive the present as well as the future, which is extrapolated from the immediate now. Your perception of the present is the same, extrapolated from a previous one, just with the seen and unseen parts switched. Almost every character in the book displaces or sublimates or transfers or otherwise creatively reinterprets the fuck out of everything that happens to them – from life trajectories to other people’s perceptions of them to the gender of military robots – in a mydriatic maelstrom of blame and effect.

In Jack’s first sex scene (out of quite a few) we can’t know whether she obtains consent or not. The character herself is not sure: “Jack hardly noticed through the distortion field of her own depression … He bowed his head in an ambiguous gesture of obedience and consent.”

The other main character’s anger over the aforementioned slavery has him take a job in Las Vegas enforcing property laws. In his job he sees innumerable grey-area arrangements that he can’t do anything about, which eventually becomes too much for him. He moves into intellectual property legislation enforcement instead, where he gets to beat the shit out of and/or murder people for stealing the recipes for medicine. All the rage he felt towards the slavers gets taken out on pirate faces and bodies. A fair exchange. Near the climax, Jack imagines him as “standard-issue … highly trained, on fire with righteous belief in property.” Like with the explanation of how the law changes, Newitz provides step-by-step assembly instructions for Eliasz’s defense mechanisms.

Several characters feel forced to abandon their principles just to do some good while they coexist with evil. The commentary seems to be that this is how it is for everyone who feels the nausea that observing injustice induces: you work within the system, trying to do your charity under the invisible noses of the faceless corporations that own the world. Someone gets murdered by our intellectual property enforcer for taking the slightest step outside that system, but someone else takes his place. She makes the exact same judgment call as he did in the first place – now that the crisis is over and no one needs to work anywhere else but inside the system – in what might be the most frustrating, antidialectical resolution to a subplot I’ve ever read.  “‘It’s just politics, Medea,’ the dean assured her … so maybe it didn’t matter that [the Big Pharma company] wasn’t going down. Maybe she’d made enough of a difference.”

When we find out that it’s robotic civil rights that made slavery legal again, we also find out that humans blame robots for that and commit hate crimes against them. If evil doesn’t have a face, at least the other person in the cage with you has a breakable nose – swing your fists all you want.

The despair that the system induces is so total, like the electronic “motes” that provide internet and surveillance everywhere there’s atmosphere, that even the author comes up short imagining an alternative.

Several characters try, but always in shorthand: “he calmly reasoned with every criticism she had, incorporating her ideas into a solution right there on the spot”, “they had a three-hour shouting match about liberty and recolonization”; we never see these alternatives. Perhaps that’s an unfair way to angle those quotes, and perhaps it wouldn’t be interesting for the cyberpunk reader to peruse an intercalated pamphlet on economy sans property law. For all its world-building this isn’t a theory book. But perhaps Newitz can’t imagine it either. Fuck knows if I know how to devise or construct such a system – I can classify but not describe it.

The story itself grows like a fascinating tumour on the fleshy inside of cyberpunk’s exposed skull (next to the pulsing neon lights). Cyberpunk is a genre well-known for this sort of learned helplessness that happens where the perpetuation of brands and companies and money becomes more important than that of human lives. Cyberpunk heroes try to fight it by living between the cracks, off the grid, somehow outside the reach of the system, but violence is omnipresent and revolution is impossible to conceive. This dictum becomes despairingly obvious in Newitz’s book and I want to blame her for making me think about it. I don’t want to be reminded that we might be essentially powerless to stop futures – or presents – like this from manifesting. Deep down I want to do like the people inside the system: move on, coexist, let these concerns be someone else’s. Unswing your fists and shut your imagination down; neon tubes flickering their last. That’s one way to survive, isn’t it.

Annalee Newitz writes fiction and nonfiction about the intersection of science, technology and culture. Currently she is an editor at large for Ars Technica, and previously she was the founding editor of io9, and the editor-in-chief of Gizmodo. Her book Scatter, Adapt, and Remember was nominated for the LA Times Book Award. She has also written for publications including Wired, Popular Science, the New Yorker, the Atlantic, Slate, Washington Post, Smithsonian Magazine, and more. She has published short stories in Lightspeed, Shimmer, Apex, and Technology Review’s Twelve Tomorrows. She was the recipient of a Knight Science Journalism Fellowship at MIT, worked as a policy analyst at the Electronic Frontier Foundation, and has a Ph.D. in English and American Studies from UC Berkeley. Learn more at AnnaleeNewitz.com or follow her on Twitter @annaleen

Johannes Punkt is part of the editorial staff at Reckoning, a non-profit, annual journal about environmental justice. His own writing occasionally surfaces, for example here or on his blog: zombiesintelligently.com. You can ask him strange questions at johannes.punkt@gmail.com

Autonomous is published by Tor. Author bio courtesy of Tor/Macmillan.