Gary Budden is co-founder of Influx Press, and a writer whose debut collection, Hollow Shores, is published by Dead Ink. A proponent of ‘landscape punk’, Budden’s writing blends weird fiction and landscape writing, with none of the distancing language that often mars psychogeography. A passionate campaigner against fascism and the far right, he is currently banned by Twitter. 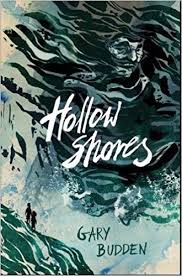 I don’t think anyone had any real expectations for me, other than to follow the usual (if such a thing exists) life trajectory: school university work marriage kids death. Becoming a writer and editor has come as a mild surprise to my family, but hopefully a welcome one.

One of the big positives of getting involved with the DIY punk scene was the crucial lesson it taught me i.e. you can make things happen. You can create your own culture, and your own scene. That sense of being proactive and not waiting for someone else to deliver the thing you want to see happening, the realisation that you can effectively conjure something out of nothing. It’s a form of magic.

It’s so empowering. You stop being a just a consumer. I genuinely believe that, in certain forms, the notion of being ‘cultured’ is just another facet of consumer culture, but with the insidious aspect that it makes the culture-consumer feel somehow elevated above others they deem inferior. But it’s not hard to get your checklist of cultural touchstones (that you were told were important by other people) and work your way through them.

I’ve rebelled a bit against that. Questioning what culture is, who it’s for, and who is allowed to make it. Just because something is in the cultural canon (a canon created by people I would have had nothing in common with) does not mean I have to deem it worthy. A bit of iconoclasm is healthy.

Bumbling and stumbling my way into creating an independent publisher.

I’m currently pleased that the concept of ‘landscape punk’ is gaining traction. That concept, created by Captain Hookland (AKA David Southwell) has allowed me to do exactly what I want to do with my writing. So I’d say my book Hollow Shores is completely me, for better or worse.

I’m very proud of what Influx Press has achieved so far. My decision to ask Eley Williams (Attrib.) to do a book of short stories with us was one of the better calls I’ve made in my life. I’m fiercely proud of Influx and can’t wait to push it to bigger and better places.

That’s almost impossible to answer! And I don’t really believe in the ‘single pivotal epiphany moment’ that fictional narratives feed us; which is probably why I write so many of them in my own work.

But of course certain moments do have profound and lasting impacts on the individual. So it’s not one event as such, but I do think the landscapes we grow up in leave indelible marks; as anyone who reads my stuff will know, the landscapes of London and the Thames estuary have shaped me and influenced me to the point that I would be a fundamentally different person without them.

If you had to make a song or rap boasting about your irresistible charm and excellence, how would you describe yourself?

I don’t think big clumsy white men in their mid-thirties should be allowed to rap. It never goes down well.

I’ve made a lot of sacrifices in terms of time and sanity to work on Influx Press. I could have spent that time watching Netflix or working overtime at a job I hate… in all seriousness, it’s probably true I’d have a bit more material wealth and stability had I not gone down the route I’ve taken, but I really wouldn’t have it any other way.

I’m not sure if that’s a sign of integrity, or madness.

Rebecca Solnit incarnates almost everything I deem to be worthwhile. In terms of intelligence, clarity of thought, commitment to ideals, and natural curiosity about the world. She also said she liked my White Horse of Uffington t-shirt once, at a book signing for The Faraway Nearby.

Jacob Rees-Mogg is currently the antithesis of everything I believe to be good and pure in the world. And I felt that before I knew he’d been having meetings with Steve Bannon. Malice hides behind those bumbling posh smiles.

My binoculars. I imagine in the afterlife the birdwatching opportunities are fantastic. Think of all those extinct birds. Moa, great auk, passenger pigeon…

My DMs and Fred Perry Harrington, too.

‘It’s hard to keep your chin up and your head down.’

I have a favourite joke about policemen, but it’s probably not printable.

What’s your favourite portrait (it can be a song, a painting, a film, anything)

Does an autobiography count as a portrait? I really, really loved Chris Packham’s book Fingers in the Sparkle Jar, charting his life as a lonely and odd kid eating tadpoles to see what they tasted like and generally being more at home with wildlife than with other people, to an angry discovery of punk rock and frank discussions of depression. For me it was the joy of finding out that someone I loved as a kid (Packham on the Really Wild Show) actually had some substance and integrity to them. That goes a long way.