How anyone reads John Barth without detailed knowledge of Greek mythology and the physical landscape of the state of Maryland, specifically the part surrounding the Chesapeake Bay, is utterly beyond me. His postmodern style, that broke such surreal ground in the late 1960s, is rooted very specifically in his life and interests, with such specificity that a reader must let his associations wash over them, a tsunami of words and images from competing times and places. How do I know this? John Barth is almost always a character in his own books, acting as a narrator explaining the writing process or even sometimes, as in the first novella which makes up Chimera, inserting himself into the action. This often comes close to being unbearable, but Barth just about stays on the right side of that line.

So what is the point of this book? It was originally published in 1973, and has been republished now. Back in 1973 it was a new way of telling stories, or of meta-commentary on how stories are told. When behind-the-scenes action is where almost all the action is these days, it’s difficult for such ideas to seem new, strange or startling. It’s worth examining now since it enables us to look afresh at the ideas of 1973. What has changed? What was boring then that is shocking now? What shocked then that only warrants a shrug?

To all of these questions, the answer is sex. And not just sex, but male power in the act of sex, which can—and in these stories, more often than not—turns into rape. The third novella, ‘Bellerophoniad’, tells the complicated story of Bellerophon, the man who rode Pegasus on his many adventures around Greece. He is flying through the sky where he sees and then attacks a young Amazon, Melanippe, who tries unsuccessfully to escape by morphing into a variety of animals (including a hind and a squid) to fight him off:

’Awfully sorry,’ I panted. ‘Long time between women, got carried away. Say, that squid was a crackerjack!’

‘Cut my throat,’ she requested, speaking into the dirt.

‘I’d kill you if I could, you sexist swine.’

There we lay. ‘I shouldn’t blame you,’ I said. ‘I’ve never deflowered anybody before, you know, much less committed rape. I’m thoroughly ashamed of myself. What shall I do to make it up to you?’ Her suggestions were ill-humored and impossible to carry out without ending my career. We were still for a while.

It is quite impossible to imagine any similar scene being written these days with such blithe panache. But of course, that’s only Bellerophon’s version of the story, which he is telling to one of his daughters. Other versions are learned separately. It’s confusing. Characters change their names, are given nicknames, do something else that warrants a new nickname, and use them all interchangeably. But all of that is Barth’s point. Stories change in the telling, depending on who the teller is, who the listener is, what the listener already knows, and what the teller of the tale means to get from the telling.

The first novella, ‘Dunyazadiad’, is the story of the thousand and one nights from the point of view of Scheherezade’s younger sister, who helps her get ready every day for her task of telling the stories every night. The second is the ‘Perseid’, about the hero who killed the Medusa—the monster-woman with snakes for hair—and who in this telling is making a case for himself to his deeply unimpressed wife. The third story is Bellerophon’s, who killed the Chimera, a monster hidden inside a volcano that no one could see, yet everyone knew was there. In all these stories Barth is a presence. 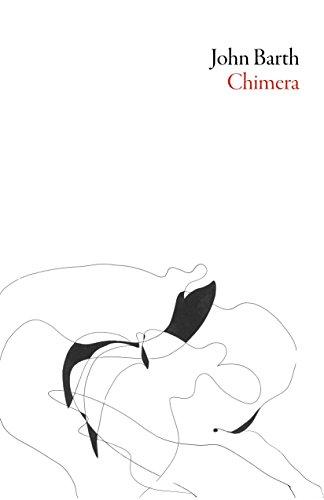 Most problematically, he time-travels back to Scheherezade’s bedside and offers to recount to her the version of her story that he grew up with. To help her efforts in prolonging her life, he will tell her the stories that she tells. It’s a little bit sweet, but it also puts a man at the centre of one of the most interesting and dramatic stories of feminine survival of all time. Barth had studied the texts in-depth though, and he centers quite clearly the idea that was radical in the early 1970s—that while these tales were being told Scheherezade was, without pause, pregnant and/or nursing her successive children.

But there is so much enthusiasm in his style that much is forgiven. Barth’s glee at getting to put his own stamps on these ancient stories is the engine that drives the book. The complex structure, the unbelievably complicated names, the references to modern life and the other stories within the tales—all this comes across as if we were sitting at his feet at a campfire, entranced with both his presence and that of the story he is telling. And it’s certainly a metaphor, all of this book, with the clue in the title. The beautiful monster, hidden inside a volcano, that everyone talks about but no one has lived to tell the tale of seeing it, and can only be reached with the end of a spear. Both then and now, more usually male authors have contempt for both their female characters and female readers. So the honesty about and the admiration for women remains new and startling. It’s what makes the struggle of reading Chimera worth it.

John Barth was born in Cambridge, Maryland in 1930. He stands alongside Thomas Pynchon as one of the giants of postwar American fiction. He is the author of The Sot-Weed Factor, The Tidewater Tales, Lost in the Funhouse, The Last Voyage of Somebody the Sailor and the National Book Award winner Chimera.

Sarah Manvel lives in London and is looking for an agent for her own novel. She reviews films for criticsnotebook.com and can be found on twitter as @typewritersarah.

Chimera is published by Dalkey Archive. Author bio courtesy of the same.