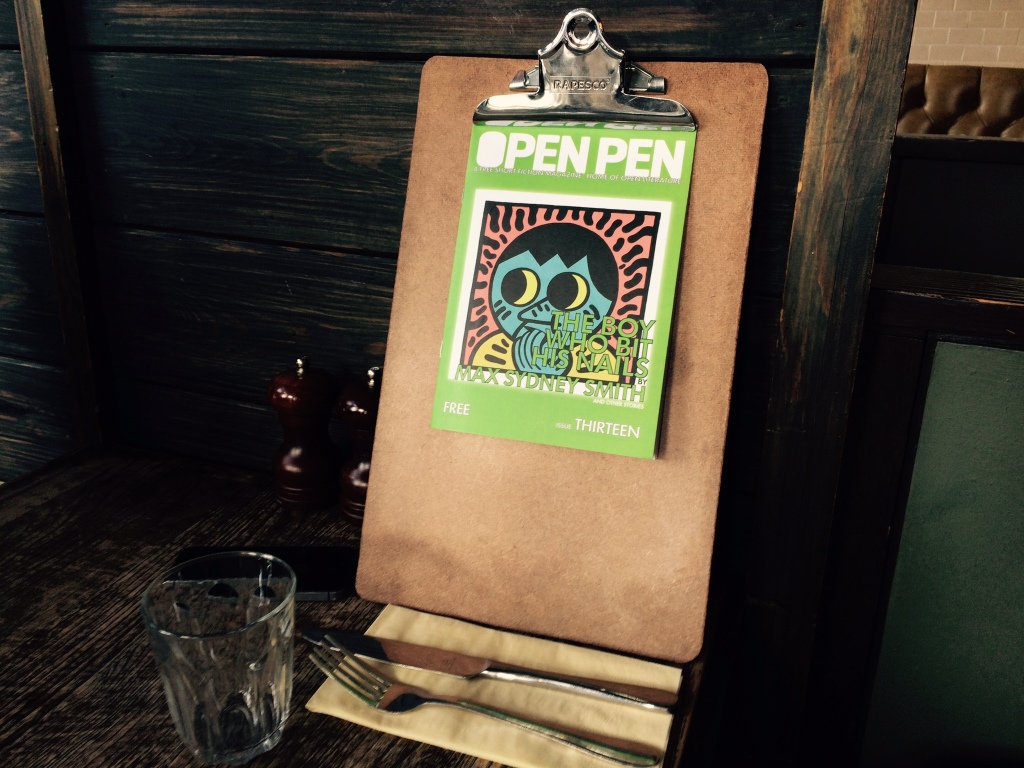 1. I don’t really know what I’m doing. I don’t really have the relevant information. However, as my chief affliction as a human being is a desperate need to please, I’m doing it anyway. Even though there’s no way it can please.

2. A profile. An outline. Just going round the edges. How hard can it be?

3. Open Pen is a magazine for new writing. It’s given away free in independent bookshops. It comes out once a month / bi-monthly / four times a year / three times a year / none of the above (I have no idea). It has published new work by x writers. y of them have never been published anywhere else before. It has nice covers. I’m not quite sure about the typesetting all of the time. The writing is very small. They are not courting the shortsighted.

4. I don’t know most of the people who run the magazine. There’s a man called Piers who has a beard and wears crumpled jackets and seems to hate me. There’s a woman called Anna who is very tall and far too well turned-out to be involved with this sort of thing. There’s Kate, who speaks very quietly, works in a bookshop and has that characteristic air of bookshop workers—that they’re always somewhere else. There’s a whole load of them and I’ve only ever met them when I’m drunk or nervous or, usually, both. I’m not sure if ‘magazine’ is even the right word. ‘Journal’?

5. Sean Preston is the only one I know, so this profile will mainly be about him. Though now I think about it I don’t really know very much about Sean, either. He set up Open Pen with some of his own savings. I remember thinking, Good luck with that, mate. Or maybe, Goodbye savings! I’m not saying I was wrong.

6. Sean is the son of northern anarcho-punks who moved to London to be nearer to the whole Crass/Dial House axis back in the late seventies or early eighties. As such, Sean has a healthy scepticism towards the whole Crass/Dial House axis, but at the same time, I can’t help feeling that Open Pen has some of the energy and lack of fear of a punk fanzine.

9. There’s been a lot of talk recently about diversity and access in publishing and this is important, perhaps as important as anything. It’s worth mentioning that there are issues of access around class as well as ethnicity. Publishing is less UKIP than Sam-Cam, all things considered.

10. Is it healthy to publish what people send you not without quality control but certainly without complete control? Or is quality control itself a sort of code for a lack of access due to class as well as ethnicity?

11. Oh, there’s N. Quentin Woolf, too, although I don’t think he’s actually anything to do with Open Pen, or at least no more than I am. He is very tall and has a beard, so that he presents as a cross between Piers and Anna. In a good way, a healthy way.

12. I should mention Leyton Orient. They are every Londoner’s favourite second team. This is another way of saying both that they are completely unthreatening and also that they are no one’s favourite team. Supporting Orient is like throwing yourself into a pit where you keep falling—forever. A friend of Sean’s who he knows from the O’s came along to one of the Open Pen events. He worked in the city, I think, and looked a bit like a maximalist version of the punk poet, Tim Wells. It was a launch for the Open Pen book. He bought a Stephen King.

14. On occasion, the pieces Open Pen print upset one or other of the more genteel members of the independent bookselling community. So even if I knew which shops stocked it right now, I couldn’t tell you if they will next time.

15. I don’t mean to suggest there’s no good writing in Open Pen. There’s loads of good writing. The work of Darren Lee, of Xanthi Barker, of Ian Green, of Kate Smalley Ellis, of Tadhg Muller, of Jo Gatford, all come to mind. What I mean is that there’s nothing which you could define as holding them together as a group. Though, like Wittgenstein’s concept of family resemblance, perhaps there is an indefinable something you might recognise even though you couldn’t turn it into a rule. (This is a way of trying to make a failure of nerve sound intellectual).

16. And energy. A kind of energy which comes from finding other people with energy, who seem to use that energy in a way which is helpful to you, which is nurturing of your energy, without ever resorting to using a word like ‘nurturing.’ It’s more like being given a box of matches and some kindling and being told to go and play. You might get a bit singed, you might even burn the house down. But it’s exhilarating. It keeps you warm.

Will Ashon’s debut work of non-fiction, Strange Labyrinth, will be published by Granta in April 2017. @willashon

All images provided by Open Pen.