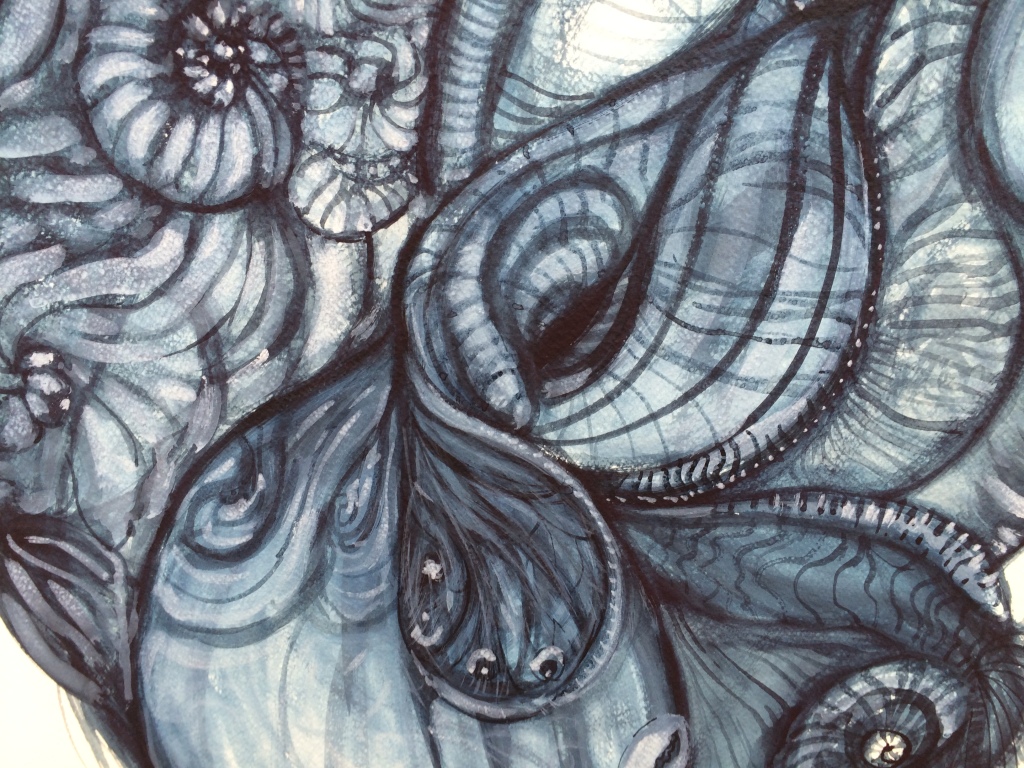 I speak ‘Ornament’. Do you? A language of embodied forms and lines that are substances, patterns that are pressures, weights, volumes, forces.

I realised one day that what I see is invisible to others, or often or mostly or maybe even always. My work, my images, my words, all invisible. So I am invisible.

My body isn’t something I look at from the outside only. I feel it, on the inside and on the outside: its pains, contortions, distortions, pressures, sensations, forces, weights, volumes, surfaces, textures.

I never think of my paintings as images. These painted lines and residues, the smears and strokes, are thought-materials, feeling-stuffs. Language is all wrong, even the punctuation is in all the wrong places.

Because of what I feel, my body is never the same. We see. We feel. We touch. All of this. All at once. Touching and feeling through our eyes. When we see, we also feel, deep inside, a gut feeling.

To know means to take apart and then put back in a new way. It means you have to destroy someone else’s frameworks so you can build new ones. Trauma leads to fantasy that carves and patterns us with its intricacies; its intensities.

A thought or an idea or a feeling is an object to me, it sits somewhere between my mind and my body. It’s a picture in my mind but it’s a thing inside my body too.

I was brought up across two cultures, a strict Islamic one and a Western British colonial one – an Egyptian father, a British mother, a childhood in Nigeria, a Catholic Missionary school, teenage years wearing the veil in Saudi Arabia. As a hybrid of these cultures and faiths, and as a kind of aftermath of colonialism, my internal struggles to forge stable identities led me to seek out a personal body vocabulary. I am drawn to hybrid, ‘grotesque’ and ornamental forms.

I attempt to express the fractured and fantastical identity formation that I imagine and feel in the many margins of my colliding and opposing worlds. I imagine my body, a woman’s body, it crosses cultures, absorbs them, contests them: it is a conflicted territory of spaces, volumes, surfaces, skins, materials and substances. This metaphorical body, it’s interior spaces/exterior surfaces, is expressed through watercolour paint on paper, but the hand paints what the body feels in the mind. Images in paint are, for me, physical formations of sensations.

Salma Ahmad Caller can be reached at salmacaller@gmail.com.