“I saw a shadow in the woods”. This opening sentence gives an idea of what is to be expected from the Hanguk Ilbo Literature Award winning One Hundred Shadows: bleak simplicity. It is in this manner that Hwang Jungeun’s hauntingly raw debut novel displays the soul of contemporary South Korea, where only the guarantee of a grim, idle existence is offered to the citizens who suffocate under the veneer of prosperity presented to the outside world. Underneath the ‘bleak simplicity’ of her writing, however, pervades a far more complex and philosophical assessment of human nature. The reader is encouraged to consider whether there is more to life than merely surviving in a dreary world, although the unmistakeably nihilistic tone, impossible to shake off from the first page to the last, supports the persistent thought that perhaps, in Jungeun’s mind, there is no such alternative after all.

Written in 2010, but only recently translated into English, One Hundred Shadows blends the realism of a social critique with neo-Gothic features. It centres round Eungyo and Mujae, two young protagonists who are starting to fall in love, a lone ray of light shining through the sordid morass of their surroundings. Against this very real backdrop, a more fantastical occurrence – the phenomenon of people’s shadows rising up and leading them away – has recently begun. At first, the urge to follow their shadows is small, but soon becomes overpowering, and eventually the owner is brought to the beckoning door of death. This assault on vitality is at times unsettling, such as when Eungyo, normally an unwavering force of life, describes the pull of her shadow. “I feel like I could die”, she says.

There is a noticeable connection between the eponymous shadows and merciless society found within the pages, as if the former now walk the streets as the embodiment of the latter. Set in an authentic slum in an unnamed city’s industrial quarter, the characters live as would be expected of anyone living in such circumstances: struggling to make ends meet; surviving until the next break of dawn on the back of frugal pleasures which break up the monotonous plight handed to them by the immutable weight of destiny. Jungeun’s pared-down writing style does not fall into the trap of cliché, as it is appropriate in reflecting what she perceives. Unlike Ernest Hemingway’s efforts to create a macho atmosphere through his sparsity, the cropped narrative here focuses attention on the characters, like a camera aperture set to blur the background. Whilst the dire social conditions are still exposed through implication, the author refrains from doing so too obviously – centre-stage is reserved for the actors alone. When everything is threatening to evanesce – businesses, families, communities, even life-force itself – the only subject of importance for Jungeun is those who remain in this barren world. Given this fragile existence, sometimes all we can do is sit and observe, like Mujae and Eungyo, who “lapsed into silence and sat there, watching the night”, before it disappears from our grasp. 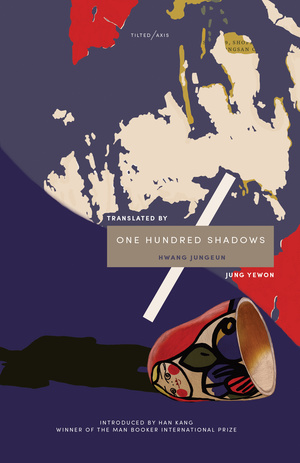 It would be easy to take this sentiment and believe that One Hundred Shadow raises serious questions about the futility of, well, everything. At times, this is merely a subtlety, such as Mujae and Eungyo’s disregard for religion, or the futile resistance to the inevitable demolition of their workshop’s building. At other times, however, Jungeun’s pessimism is laid bare, as when one man’s only use for a Bible is to crush woodlice, and Mujae laments how “the essence of human life is futility”.

In addition to casting doubt over whether meaning is to be found in anything, the author is clearly aware of the consequences of her nihilistic tendencies for her own writing. There are seemingly arbitrary events (such as Eungyo’s disproportionate and lasting obsession over the wellbeing of a frog she once saw) which, in the absence of any obvious relevance to the plot, tempt the reader into chasing non-existent symbolic representation. This reminded me of a short story by Vladimir Nabokov – “Signs and Symbols” – which he wrote for exactly this purpose: to reveal (and mock) how readers love to scramble beneath face-value for what is not there. “This is how the world is,” Jungeun appears to be implying, “just let it be”.

But to reduce One Hundred Shadows to an indulgence in sepulchral nihilism would be a disservice. There are moments of mesmerising descriptive beauty which offer a break from the bare harshness of the writing, the image of a lone group of flowers breaking through the pavement particularly comes to mind. Scattered amongst the gruelling and quotidian banalities are brief pleasures, such as that brought by food, which Jungeun underlines with remarkably insistent descriptions (“steaming stir-fry”). The presence of these, so rare yet so vividly juxtaposed with their lugubrious surroundings, suggests that even a life like this offers some moments of respite.

It is now that Eungyo and Mujae’s love both makes sense and helps make sense of the novel’s message. Hang Kang, author of The Vegetarian, sees the relationship between these two as a “moral necessity set against the leaden weight of violence of the world”, and, in light of their rejection of an oppressive society and the unpreventable ascent of the shadows, this comment rings true. Amidst the minor occasions of optimism previously mentioned, the couple tower above as a symbol of obdurate denial that everything is against them and always will be, a symbol which they could never hope to be by themselves. Indeed, there is something of Camus’ absurd hero here: the contemporary echoes of Sisyphus pushing his boulder up the hill, only for it tumble back down again. But still they press on, as Sisyphus did (and maybe still is?), stubborn against the ultimate pointlessness of their toils, refusing to believe that the world has to be this way.

Often the connection between them seems unbearably gossamer, as when they are unable to see each other during an electricity blackout. This connection, however, which looks ready to disintegrate in the gentlest of winds, is preserved as Mujae “sings… down the phone” to Eungyo. Whilst physical bonds are important, Jungeun seems to be saying that it is the spiritual which is able to cleave the bleak inertia of life.

On the surface, One Hundred Shadows depicts a fledgling love story which is destined to be hampered by the poverty endemic in South Korean society. So severe is this scourge, it has begun to take physical form in the appearance of shadows, leading souls away to a harrowing end which is all too inevitable. But, hidden beneath this, Jungeun uncovers a characteristic inherent in humanity and impervious to such a fate, which is at times as beautiful as it is agonising to witness. This novel is to be accredited to South Korea’s emerging and exciting literary scene, but its scope is far broader than the parameter of any national milieu; it is both a dirge and a paean to universal human condition.

Hwang Jungeun is one of the bright young things of Korean literature, having published two collections of short stories and three novels to date. One Hundred Shadows (2010), her first novel, was both a critical and commercial success; its mix of oblique fantasy, hard-edge social critique, and offbeat romance garnered the Hankook Ilbo Literary Award and the Korean Booksellers’ Award.

Jung Yewon is the translator of One Hundred Shadows, by Hwang Jung-eun. She is also the translator of No One Writes Back by Jang Eun-jin and one of the co-translators of A Most Ambiguous Sunday and Other Stories by Jung Young Moon, both published by Dalkey Archive as part of their Library of Korean Literature series. Her translation of Jung Young Moon’s Vaseline Buddha is published by Deep Vellum.

Marcus Solarz Hendriks is a full-time tennis player. He can be found at his blog ‘Rambunctious Racquet’ – http://rambunctiousracquet.blogspot.co.uk/. He lives in Surrey, England. @hendriks_marcus

One Hundred Shadows is published by Tilted Axis Press. Author and translator bios courtesy of the same.